Forum About Trading on Forex,Stock,Binary Options, and CryptoCurrency

Proof. Follows from the reflection principle and the harmonic/arithmetic mean inequality.

Conditioning the process to return to its starting point at the end is unrealistic. If we knew that, then we should buy only when the price is lower than the initial price. Such a strategy would dominate DCA.

= net gain up to month n from investment stream Ak .


The quadratic variation of X is

Theorem. The quadratic variation of the gain process, Y, is given by where 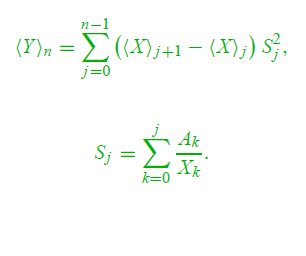 
Proof. From the previous proof and the definition of process S, we have

Since the stock price and gain processes, X and Y, are martingales, we see that

From the definition of quadratic variation, we see that

Summing both sides completes the proof.

A fundamental result in stochastic calculus is that the stochastic integral of a predictable process against a martingale is again a martingale.The discrete time analogue is as follows:

Theorem. If X is a martingale and B is an adapted process, then

The process R is predictable:

Convert all dollar amounts to discounted (time 0) values. The gain process is measured in discounted terms: 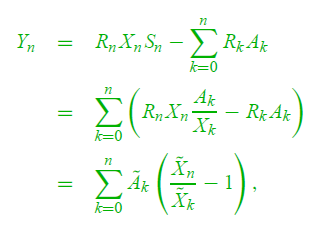 represents the initial value of the input at time k. Our earlier theorem now says that DCA simply tracks the trend in the stock price.

Theorem. The gain Yt at time t is given by

If B is locally of bounded variation, then Y is a continuous local martingale.

Proof. Start with the stochastic integration by parts formula:

From the definition of S, we see that

Hence the formula for Y.

If B locally has bounded variation, the S does too. Hence, the cross variation {X, S}t vanishes. Since S is continuous, it is predictable and so the remaining stochastic integral is a martingale.

1. If shares are purchased but not sold, then B is increasing and hence is locally of bounded variation.
2. If B has unbounded variation, then ( X, S) is not expected to vanish. In this case, the gain process can be a submartingale—and that’s a good thing.
See example:

Suppose that Bt = Xt for all t. Using Ito’s formula we get 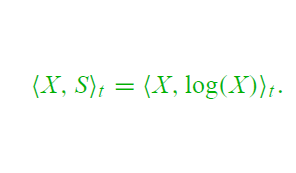 Since (X, log(X)) is increasing, the gain process Y is a submartingale.

A seemingly harmless assumption, the ability to buy and sell very fast with no transaction cost, leads to a plainly absurd result.

The Black-Scholes option pricing formula assumes the ability to trade fast without transaction costs. The result is a formula that depends on volatility but not on drift. Consider historical data for companies A (on the left) and B (on the right):

They both have the same volatility. Would you pay the same price for an option on these two companies? (Be honest!)